In June of 2002, at the Reverie, I met a very beautiful, young woman, who reminded me in wit, style and mien of my first love. On her table at the cafe, she had a copy of “The Origin of Consciousness in the Breakdown of the Bicameral Mind,” which she was reading for fun. I will not mention her name here because she is the sort of person who has just deleted all her flickr and Facebook accounts. I respect her privacy. All I can say is that for this month, she was my muse.

We went to the SF MoMA to see the Yoko Ono Exhibit. At the time I was trying to find work as a writer, and hoped that building my portfolio through art reviews in print would work.

For this review, I would write about our date, which got published in a small zine called H2SO4 (defunct).

We both liked the chess board with only white pieces which forced you to imagine peace. 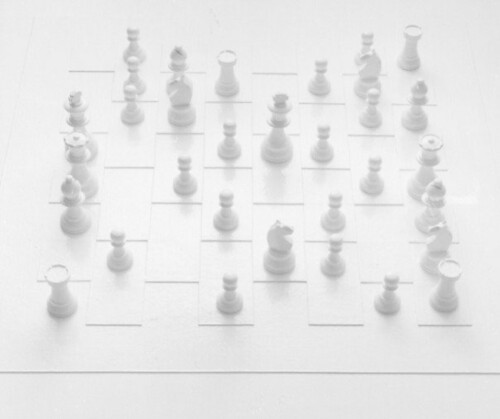 Books: The Origins of Consciousness in the Bicameral Mind
Art: The Yoko Ono Exhibit at the SF MoMA in 2002

Another wonderful thing happened. I got to do my first poetry reading at the Van Der Zanden Studio in Berkeley. The poems now seem naive, but here’s one:

Also, my pals, Sam and Ani, who met at the Reverie, got married on the 15th. I helped them clear out a Rose Bush from Ani’s mother’s backyard, where the wedding was held. They both co-founded an Internet App business that is still around called Radical Fusion.

I was living in a Victorian on Frederick Street between Waller and Ashbury.

I was living with 6 other people. Half of us were part of Spinoza’s Coat and the other half weren’t. Not that created any tension, or anything.

The first big outing I went on after returning back home in San Francisco was seeing “The Royal Tenenbaums” at the Red Vic. All my flatmates were there as well as some folks from the Reverie. Most of them were either poets or musicians who barely made a living in San Francisco as barristas.

One of my flatmates started crying while she was watching the movie. I really didn’t get it at the time.

During that month, I volunteered a lot. I went to Bayview to fix bicycles because although lots of people ride bicycles in the Bayview, there isn’t a bicycle shop close by like in the Haight.

When I would go to the Reverie, I would write poems. I wanted to be like the poet barristas I saw.

Movie: The Royal Tenenbaums
Book: The Timaeus by Plato

Before I leave San Francisco and leave for Los Angeles, I’m going to spend some time each day thinking about the months I’ve been in San Francisco.

In April 2002, I just returned back from living in Bolzano, Italy. Half the people there spoke German. I have the journal where I would write all my thoughts in German. I wrote my last German entry the day I got back to San Francisco.

I thought I would never come back to San Francisco, but I was pulled back by all these wonderful people I met when I’d come back home.

book: The Timaeus by Plato

My favorite party question: What about you do you think is sexy?

Quote of the Month: “Who somebody is or was we can know only by knowing the story of which he (or she) is him (or herself) the hero.” from Hannah Arrendt’s “Human Condition,” p. 186.

During this time, I would spend most of my days in the Reverie Coffee Shop. I would wake up in the morning, get my coffee and just read philosophy and write. During the day random people would stop by, and we would chat for as short as a smoke or as long as an hour. People have lost the art of doing this, but at that time, the web was thought to be dead. We returned to a more natural way of relating.

My life was carefree.

I belonged to a philosophy group called Spinoza’s Coat. We would meet every Tuesday evening to discuss philosophy. It consisted of mostly like minded folks who met at the Reverie, or what we nicknamed, “The Rev.”

That April we were reading Plato’s Timaeus. It’s Plato’s attempt at a metaphysics of the material world. I like how he just defined something like time as “the moving image of Eternity.”

I was very happy to be back in my home town after living abroad.

Zoe Greystone: The human brain contains roughly contains 300 megabytes of information. Not much when you get right down to it. The question isn’t how to store it. It’s how to access it. You can’t download a personality. There’s no way to translate the data. But the information being held in our heads is available in other databases. People leave more than footprints as they travel through life: medical scans, dna profiles, psych evaluations, school records, emails, recording, video, audio, cat scans, genetic typing, synaptic records, security cameras, test results, shopping records, talent shows, ball games, traffic tickets, restaurant bills, phone records, music lists, movie tickets, TV shows… even prescriptions for birth control.

How did the snail get on this leaf? The sprig that holds the leaf is so narrow .

How does networked computing alter how we use the concept of “being?”

How do you see? For example, what goes on when you look at something like this:

Here’s a picture of an eye:

How do you see?

While doing laundry at Central Coffee, I ran into a passage in “The Origin of the Work of Art” by Heidegger.

He compared peasant shoes with a well-known painting by Van Gogh of peasant shoes. He wrote of the shoes (and not the painting), “Everyone is acquainted with them.” (p. 32, “The Origin of the Work of Art,” in Poetry, Language, Thought) For my part, I had never seen peasant shoes, until I googled them:

Then I took a look at Van Gogh’s famous paintings at these shoes:

Although I can see similarities between the peasant shoes from google and Van Gogh’s peasant shoes, I was surprised to learn that Van Gogh’s shoes were probably a pair of peddler’s shoes.

What are peasant shoes? Has anyone seen them since – at least in the English speaking world – there haven’t been any peasants for centuries?

Philosophy is difficult in a world without pith and constancy.

Update 18 July 2014 Thanks to a reader who goes by the moniker, Peasant Painter, for updating me and letting me know that the shoes below aren’t peasant shoes but ones used for Chinese foot binding.

“Love is giving something you don’t have to someone who doesn’t exist.”

There is a paradox here that needs to be explored. Although the last two photos express unlocked-ness, a certain being-in-the-world will readily interpret the two photos as expressing the opposite: lockedness.

This sort of paradox can be seen when naturalness is seen in that which is unnatural. Note the urban mushrooms below: